The latest newcomer in the effort to turn Crossgates Mall into a nightlife destination is Rascals Steakhouse, located on the second floor across from the Funny Bone comedy club. Rascals is unique because it presents itself as a moderately upscale steakhouse, but with an attached entertainment venue. The side room off of the dining area has a large stage for concerts along with two additional bars. The concept seems to be that you should bundle dinner out with your concert tickets for an all-in-one package. 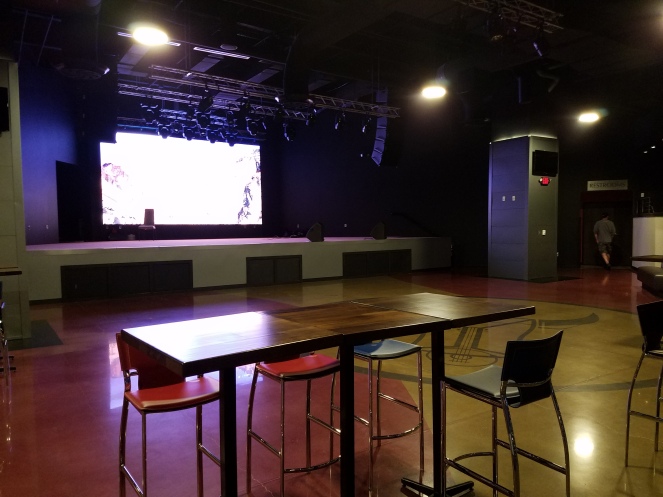 I haven’t been completely sold on the recent transformation at Crossgates. The first time I was going to an evening movie and walked past bouncers outside of Dave & Busters, it felt very out of place. And now with the opening of Lucky Strike Social, which seems a bit redundant, as well as the comedy club, the mystery room, and World of Beer, it’s clear that the mall’s developers are trying to pull in a new type of crowd. To some extent, it must be working, because the mall was completely packed on a Saturday night and parking was hard to come by.

Full disclosure on our meal at Rascals – although I know the restaurant’s name includes the word “steakhouse,” we decided not to try any of the steaks. I thought the prices were on the high side, and there’s only so many interesting and creative ways to present a steak. One of the things that originally piqued my interest about Rascals was that the menu is actually quite lengthy and diverse. So we decided to just try a few of the more interesting sounding entrees and leave the steaks for another time.

For an appetizer, we tried the Prince Edward mussels, served in a curry coconut sauce with fried leeks, roasted red peppers, and grilled baguette slices. The sauce was not a particularly strong curry,  and some of the fried toppings were too tough and stringy to really be enjoyable. But the mussels were all fresh and meaty, and the portion size was great for an appetizer. One of the best parts of this dish was the unexpected presentation – there was some dry ice beneath the bowl, and when it was first placed on the table, our waiter poured hot water around the dish, creating a foggy mist that engulfed the entire plate.

This is probably one of the prettiest dishes that I’ve eaten in a while. The mix of colors and textures in the visual presentation was a nice balance, and clearly some time was spent on this design. But alas, the same can’t be said for the flavors. The carrot puree was nearly tasteless, although the smooth consistency mixed nicely with the light sweetness of the pomegranate sauce when they overlapped. The scallops were well cooked and seasoned, but some of the roasted vegetables were underdone. In particular, the leeks were dense and chewy, and the little cubes of celery root were tough. This dish in general was kind of lukewarm – both literally in terms of temperature, and in terms of a rather bland flavor combination.

We also tried the broiled venison and rabbit sausage platter, which is served with two cauliflower purees, a whole grain mustard, a port wine jus, and sauerkraut.

There was clearly some effort put into the presentation of this dish as well, but it just felt kind of jumbled. It also felt like they were trying to disguise the fact that there was so little sausage by cutting it into lots and lots of pieces. That being said, the sausage itself was flavorful with a nice amount of saltiness and juiciness. The cauliflower purees were interesting, including one made from purple cauliflower that added a nice touch of color to the plate as well as a mild, earthy flavor that melded well with the savoriness of the meat.

Final Rating: 6/10. I fully realize that Rascals hasn’t been open for long, and that new restaurants need some time to get in their groove. The physical space was well decorated, the service was attentive, and the dishes were beautifully presented. But for a price point that’s slightly higher than other nearby options, including other restaurants in the mall, I would expect the food to be on a higher level. Hopefully with time they can work to develop bolder flavors and to rectify some of the cooking inconsistencies.