I was fortunate enough this year to be able to take a trip to Italy, primarily in the Tuscany and Liguria regions. And as a food enthusiast and zealous planner, you better believe that I had our food itinerary planned out every step of the way. Here’s a sampling of some of the best dishes we ate along the way. (Spoiler alert: it’s mostly carbs. Beautiful, delicious carbs.)

One of our favorite dishes that we saw on almost every menu was seafood spaghetti. It seemed simple, and much like something that you could order in America, but the preparation was consistently above and beyond anything that I’ve had before.

The sauces usually only had a hint of a tomato base along with a little bit of rich, salty seafood broth and herbs. They usually had mussels, clams, and squid, and sometimes a few prawns. It seemed like everything was cooked together so that the pasta was really infused with the seafood flavors. The shellfish tended to be a little smaller and more delicate than what I am used to, but it was always exceptionally fresh and tender.

The meal that I was most excited about, and in fact the only place that I made reservations for ahead of time, was dining at Trattoria dal Billy in Manarola in the Cinque Terre region. This small restaurant fills up quickly, especially if you want to sit outside on the patio with views of the sea at sunset. It was beautiful.

They are also well known for the quality of their seafood dishes, including a twelve course appetizer that samples different preparations of fresh seafood from the region. It was a great way to try lots of local dishes in a limited amount of time. 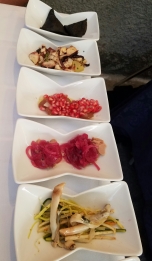 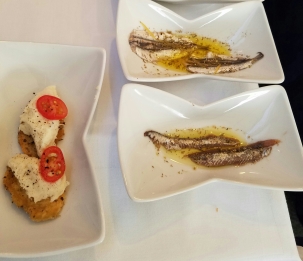 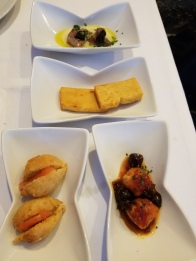 The standouts from this sampling were a warm octopus salad with potatoes and olives (second from the top in the left picture), fresh sardines with lemon and olive oil (first on the right in the center picture), and fried cuttlefish with a spicy cherry sauce (bottom right corner of the right picture).

I tend to always order specialty ravioli on a menu wherever I go, and Italy was no exception.

I found that the fillings were much more ricotta based than ravioli I’ve bought in America. For example, a mushroom ravioli in the States is filled almost entirely with noticeable mushroom chunks – but in these regions, it was 90% ricotta with some pureed mushroom mixed in. A veal ravioli that I ordered basically had only ricotta inside with a slight meaty taste and coloration.

One of my favorite dishes was a pear ravioli starter that we ordered at La Giostra in Florence. The pear mixed into the ricotta added only a mild touch of sweetness at the end of each bite, and the pasta shells were really delicate. The ravioli was served in a light and creamy sauce that allowed the hint of fruit to shine through without being over the top.

I also really enjoyed these neon green guys, which had a squid ink shell and were stuffed with ricotta and sea bass. They were topped with a creamy spinach sauce and a generous sprinkling of olive oil. In fact, one takeaway from a lot of our meals was that a high quality olive oil is well worth the investment. A lot of the soups and pasta dishes were finished with a dash of olive oil that lingered near the top and became one of the first taste impressions of the dish. Even just the olive oil served with complimentary bread at the table was miles ahead of the olive oil that we usually buy or see served at American restaurants.

Speaking of green sauces, Liguria in particular is well known for its pesto sauces. We tried the classic trofie pasta (a kind of dense twirled shape) with pesto, green beans, and potatoes in Cinque Terre and it was good, but perhaps a little overwhelmingly flavored and pungent. I think it would have been better as a side dish to a meal instead of a main course.

My favorite pesto dish was actually from the upstairs level of the Mercato Centrale in Florence, an open concept food market near the train station. The first floor of the market is the more traditional grocery and produce vendors, while the upstairs is a series of restaurant stalls with communal seating in the middle.

I ordered the gnocchi at a fresh pasta stall, and was pleasantly surprised to find it served with pesto sauce and a generous coating of fresh Parmesan cheese. The gnocchi were meltingly tender and light and the sauce had just the right amount of basil kick to it.

One of the most common pasta preparations that we saw on almost every menu in Tuscany was pasta with a meat ragu sauce (typically boar or duck ground meat, sometimes in sausage form). More often than not, it was served over a freshly made pappardelle pasta.

These dishes were a little different than a pasta with meat sauce that you might order in the States mostly because they had a lot less red sauce mixed in. Some looked like they were just meat on top of dry pasta with grated Parmesan cheese, while others (like the one pictured) had a small amount of marinara to tie it all together. I tended to like the preparation with a little more sauce, but maybe that’s just because it was more like the Italian-American dishes that I’m used to.

The regions we traveled to in Italy are not traditionally known as the best pizza regions in the country. But you know I had to try to track down an “authentic” Italian pizza while we were there. I managed to find a couple of places in Florence that were allegedly serving a Neapolitan style pizza, and ordered a classic margherita pie (tomatoes, fresh mozzarella, and basil).

This pie was heavenly, and I may or may not have eaten the entire thing myself. The crust had a nice amount of char to the outer edges but was still soft and chewy on the bottom. The sauce was rich and salty with strong tones of fresh basil. Like many of our dishes in Italy, there was some bright tasting olive oil sprinkled on top. It was perfection.

We ate a lot of gelato everywhere we went in Florence. You think to yourself that you’ll have one or two and then you’ll be over it for the trip, but you’re lying. There were so many flavors to try and slight variations among the different places that you have to keep going back and finding “the best.” My overall favorite was the pistachio gelato from this little hole in the wall place in Florence called Caffe Patriarca. We sampled it a few times just to make sure this recommendation was solid. I stand by it.

The most surprising dessert finding for me in Italy was how much I loved the cheesecake. For purposes of full disclosure, I am that rare person that truly hates cheesecake most of the time. It’s an unpopular view, but I have tried so many versions and always feel immediately repulsed by the texture. I feel like I should enjoy cheesecake, so I keep trying it at different places, but always with the same results. Until our trip to Italy.

The cheesecakes were ricotta based and were so incredibly light and airy. They were barely sweetened. The one pictured was actually served warm, so it had a melty consistency that was divine. The bottom had a thin, crumbly crust that had an almost toffee-like buttery richness. The sauce tasted like it was only pureed fresh raspberries with a touch of mint and nothing else added.

I know this has been a long post, but I have so many more pictures and recommendations for anyone who’s interested or who’s planning a trip to Tuscany or Liguria in the near future. Email me if you want more details! In addition to some truly amazing food, I also found the Cinque Terre region in particular to be completely stunning. Everyone should add it to their bucket list immediately.

2 thoughts on “Italy – Tuscany and Liguria”