I have wanted to visit New Orleans for a long time now, mostly just to eat all of the foods. I finally had an available long weekend this month, despite the fact that it was going to be blisteringly hot and that we were traveling in peak hurricane season. It didn’t matter – I was determined to go and eat as many things as possible. But once I started brainstorming all of the “musts,” I realized it would be difficult to do in a few short days. Difficult, but not impossible.

Without listing off every wonderful meal that we had in the Big Easy, I wanted to share a few highlights in case any of you have the chance to visit sometime soon. For more recommendations or ideas, feel free to shoot me an email or comment below – I have quite a few other tidbits of knowledge from this trip that I would be more than happy to share.

The first thing that most people think of when picturing food in New Orleans are the beignets. These scrumptious little squares of fried pastry are topped with an obscene amount of confectioners’ sugar. They have a taste almost like fried dough you would get at a fair, but the texture is a little bit more flaky or airy depending on the dough used. 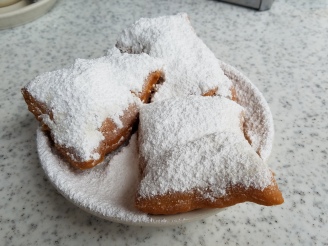 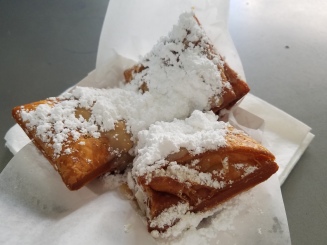 We did the iconic Cafe du Monde in the French Quarter and the beignets were excellent, but I think you can find something equally as good with less hassle elsewhere – there are plenty of cafes serving up the same dish. Service at Cafe du Monde was pretty non-existent, and the crowds were crushing. Plus the coffee was almost tasteless.

If you think to yourself that the beignet looks great, but you could use even more decadence, considering checking out the praline beignets from Loretta’s Authentic Pralines in the French Market. They are topped with melted praline – a candy that is made of pecans, sugar, and cream with an almost caramel type of flavor.

The lunch game in New Orleans is strong. I was determined to try a couple of the classic sandwiches during our visit : the po-boy and the muffuletta.

For our po-boy sandwich, we headed up to Parkway Bakery & Tavern in the mid-City neighborhood. This place has been serving up po-boys for decades, and it was neat to see some of the original signs and menus inside.

A po-boy is essentially a sub on long french bread with a variety of filling options – the most popular in recent years being fried shrimp or oysters. I would recommend staying away from the roast beef offerings here, which come loaded with gravy, and instead stick to the classic seafood versions. Get it “dressed” with lettuce, tomatoes, mayo, and pickles. The shrimp are perfectly fried and seasoned, and it is a crisp, well portioned sandwich. Nothing fancy, but just solid and enjoyable.

For our muffuletta we went to the place that claims to have invented the thing – Central Grocery in the French Quarter. This sandwich is served on a crusty round loaf topped with sesame seeds, and filled with an Italian mix of meats and cheese. The key ingredient is a chunky olive spread that is salty and garlicky and lovely. The store sells so many of these sandwiches that they have a huge batch pre-made each day, and you can order a half or a whole sandwich (the half is plenty to split between two people). This was great, although we thought it was a bit heavy on the cheese.

Of course it’s no surprise that the gulf area has lots of great seafood, including shrimp. We had a number of wonderful shrimp dishes, including the classic New Orleans bbq shrimp, typically served whole (with the head and legs) in a soupy sauce of butter, worcestershire sauce, garlic, and peppery seasoning.

One of my favorite variations of this dish was actually on a brunch menu at Willa Jean – with bbq shrimp on top of thick cut sourdough toast and burrata.

Another famous seafood dish to get in New Orleans is grilled oysters, topped with butter, cheese, and breadcrumbs. You’ll find this on many menus as an appetizer, and there are a few tourist traps in the French Quarter that specialize in grilled oysters (but have lines around the block).

One of the absolute best things that we ate on this trip was a spicy version of the grilled oysters at Cochon in the Warehouse District. They were topped with a chili garlic butter that was out of this world good.

We tried quite a few classic dishes and sides in the City that included the “holy trinity” of onions, bell pepper, and celery along with cajun and creole seasoning – things like gumbo, red rice and beans, and etouffee.

One of the standouts was a crawfish etouffee at Jacques-Imos – absolutely packed with crawfish and richly seasoned. This place gets crowded and doesn’t take reservations, so get there right at opening or be prepared to wait a while. In addition to great food, it has a really neat vibe with painted murals covering all of the walls and an open kitchen.

We also loved just about everything else we ordered at Cochon – the same place with the chili oysters. Although the menu was less of a chance to cross classic items off my must-try list, everything was really top notch and memorable. The name “Cochon” is the French word for pig, so as you can imagine, much of the menu is pork based. My favorite dish was the “Louisiana Cochon” – a mound of pulled pork on top of cabbage, pickled peaches, and cracklins with a hint of heat.

New Orleans is a really fabulous city for sightseeing and music, but also the cuisine. We were able to try a variety of things, from informal lunch sandwiches to classic creole seafood dishes and decadent brunch plates. At the end of the day I didn’t get to try everything on my list, but we came pretty close. And it was every bit as delicious as I had hoped it would be.