Namu Korean BBQ in Colonie has been on my must-try list ever since I had hot pot for the first time in Manhattan a while ago and searched for similar Capital District places. It turns out that while they do have a “hot pot” section on the menu, it’s not quite the same experience – you cook the soups and stews at a burner on your table, but it is less customizable than what I was looking for back then. The menu has a pre-set list of soups that you can choose from, rather than picking separate broth and meat and vegetable options.

But even with that being said, I was still curious to get here one day and see what the menu was all about. There don’t seem to be many places around that do Korean stews and BBQ right at the table, so it’s a somewhat of a unique experience. Plus I have gotten a real appreciation for Korean food after many wonderful meals at Sunhee’s in Troy. I was curious to see how this place (with a much broader menu) would compare.

The best way to try this type of food, especially for those with limited knowledge of Korean cuisine in general, is to go with a big group so you can try lots of things. I was lucky enough to find a group of willing participants through an unofficial Yelp event, including some who had spent time in South Korea and knew how to steer us in the right direction.

First up was an order of Korean fried chicken wings, with the “hot and spicy” sauce (only available Mondays, Wednesdays, and Thursdays). At first glance these didn’t appear to have very much sauce on them, but they were pleasantly sticky and messy once you started digging in. I wouldn’t call them “hot” by any means, but there was a nice peppery flavor, and the skin was incredibly crispy and delicious. I could have eaten a lot of these.

We wanted to try at least one stew from the “hotpot” menu, so we went for the toppoki, which has a spicy chili sauce, little rice cake tubes, slices of fish cake, a hard boiled egg, noodles, and various vegetables. 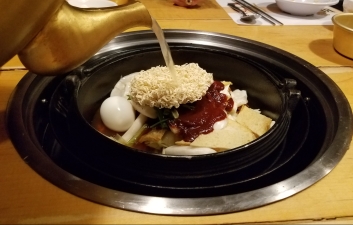 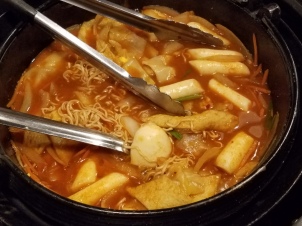 I absolutely loved the broth in this stew. It had some spice along with some sweet notes that resulted in lots of depth and complexity. There was a perfect mix of textures, including the odd chewiness of the rice cake tubes and a little bit of crunch from the vegetables. And an unexpected option at the end was that we could add fried rice for a couple dollars more. They mixed together rice and cubed vegetables when there was just a little bit of broth left in the bottom of the bowl and cooked it in a compressed flat layer. This was a great way to get every last bit of that delicious broth.

Of course we had to try some BBQ as well, so we went for the classic bulgogi (thinly sliced marinated beef). They fried this at the table in front of us, and once cooked it is eaten wrapped up in lettuce leaves. We added some garnishes of kimchi and a soy based sauce for a really nice lettuce wrap experience. Alas, I only have the “before” picture of this beef right when it went on the grill, because it didn’t last long at our table. The meat had a nice flavor from the marinade, and a great smokey char from the grill. Portions were a little small for sharing with a group, so you might want to order a couple different varieties if you find yourself in a crowd.

There’s a lot that’s just inherently fun about dining at a place like Namu, where your food is grilled or stewed at the table right in front of you. I also love going to Korean restaurants that serve banchan – a collection of little tiny appetizer plates that come with your meal (you can see some examples in the picture on their BBQ menu page). At Namu, this included a seasoned hard boiled egg, little chunks of fish cake, kimchi, and snow peas in a sesame oil sauce. Plus you get a small salad with fresh ginger dressing. So even though some of the prices might seem slightly on the higher side, you really do get a good value when you consider all of the food that’s added in. Not to mention that the environment is perfect for sharing a communal meal with friends. I really encourage you to check this place out, preferably with a group of friends and a couple of hours to spare on a leisurely afternoon.